Antifungals for the treatment of onychomycosis

In the natural microflora of humans and animals, pathogenic fungi are not present. Fungi are eukaryotes that have no chlorophyll and are incapable of photosynthesis. Most fungi are environmental saprophytes (heterotrophs) and must be fed with ready-made organic substances. The body of the fungus is represented by the mycelium - a network of thin tubular filaments with branches called hyphae. Fungi multiply by spores. Introducing into the tissues of a sensitive host during accidental inoculation, in its favorable nutrient substrates, the fungus can cause various diseases of the skin, mucous membranes and internal organs. Fungal diseases are called mycoses (from the Greek. Mykes - fungus). 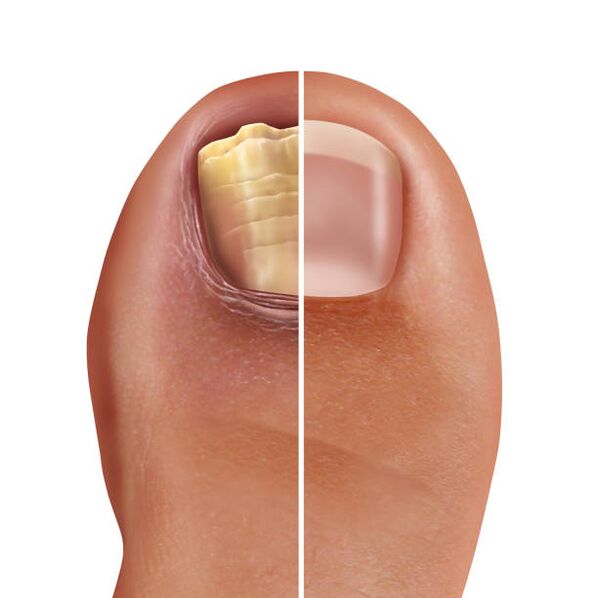 The causative agents of mycoses are microscopic parasitic fungi of the genus: Artroderma, Aspergillus, Amanita, Microsporum, Penicillium, Candida, Saccharomyces, Trichophyton, Epidermophyton, etc. Systemic mycoses of internal organs are very difficult and can affect, in addition to the skin, muscles, bones, internal organs and the nervous system. Actinomycosis is a serious disease caused by actinomycete radiation fungus, blastomycosis is a deep mycosis of the skin, the causative agent is a pathogenic dimorphic fungus. Other diseases also belong to deep (visceral) mycoses. Superficial mycoses affect the stratum corneum, scalp, nail plates and mucous membranes.

The most common keratomycosis, which affects only the stratum corneum; dermatomycoses affect smooth skin, epidermis and its appendages: hair, nails.

Depending on the type of pathogenic fungus and the localization of the pathological process, there are:

Onychomycosis is caused by infection of the nail plate. Most of the infection occurs in public baths, saunas, swimming pools. Scales, which contain fungal spores and mycelium, that fall on onychomycosis patients, fall to the floor, benches, spears, paths, carpets and rugs. In conditions of high humidity, the fungus can not only stay for a long time (years), but also multiply, which makes them an intense source of infection. A person who moves on the floor barefoot or touches household items with such scales can become infected because they stick to his skin and are fixed. Infection develops after the fungus penetrates the nail structures. In the future, they begin to activate, multiply and form tunnels, crossings. When touched, nails thicken, crumble, turn yellow and break. Sometimes the process also affects the skin, which is accompanied by itchy, hairy rash in the interdigital area. Such diseases are distinguished by a long and continuous course.

The possibility of susceptibility to infection increases with age, especially in the elderly over 65 years, due to the presence of such chronic diseases as vegetative-vascular pathology, diabetes mellitus, peripheral circulatory disorders, osteoarthropathy of the legs, etc. Changes in nail plates.

Treatment of onychomycosis is carried out strictly according to a certain scheme for a long period of time - from 2 to 4 months. In therapy, antifungals are used, which have a fungistatic and fungicidal effect and affect different stages of vital activity and metabolism of pathogens. There are three main mechanisms of antifungal action of antifungal drugs, which manifest their activity as a result:

GriseofulvinSkeda (Griseofulvinum). 125 mg is an antibiotic produced by the fungus Penicillium nigricans (griseofulvum), was isolated in 1939 and is a spiro derivative of benzofuran in structure. The drug has fungistatic properties against all types of fungi - trichophytes and epidermophytes. The mechanism of fungistatic action is based on the ability of the drug to inhibit the cell division of filamentous fungi in metaphase, causing characteristic morphological changes (twisting, increased branching and curvature of hyphae), disrupting mitotic finger structure and m-synthesis. To a small extent, the drug inhibits the synthesis and polymerization of nucleic acids. The drug has no antibacterial activity.

To create a sufficient concentration of the drug on the skin requires long-term treatment - 2-3 months min. Only in newly regenerated nails will the first symptoms of treatment effectiveness be noticed.

Important! Side effects when taking the drug include: dyspeptic disorders, dizziness, sometimes insomnia, allergic reactions, leukopenia. Griseofulvin is contraindicated in the suppression of hematopoiesis, liver and kidney failure, as well as in infants and pregnant women. You should not prescribe medicine to transport drivers, persons engaged in work at high altitudes or who require extra attention, rapid mental and motor reactions. Patients should be warned of the development of possible cross-sensitivity to penicillin and of the increased effect of alcohol.

Ketoconazole(Ketoconazole) - a broad-spectrum active drug from the imidazole group with fungicidal and fungistatic activity; effective when taken orally with systemic and superficial mycoses, dermatomycoses and candidiasis. It is prescribed by a doctor for the treatment and prevention of fungal infections of the skin, hair, nails, genitals caused by drug-sensitive pathogens.

When administered orally, the drug is well absorbed, digested and absorbed in an acidic environment.

Important! The drug is well tolerated by patients, but can cause dyspeptic symptoms (nausea, vomiting, diarrhea), very rarely there are allergic reactions in the form of urticaria and skin rash, headache, dizziness, gynecomastia, impotence. With concomitant use of the drug with other drugs (fentanyl, tamsulosin, carbamazepine, salmeterol, etc. ), the concentration of the latter may increase with an increase in side effects.

Contraindicated in severe liver, kidney, pregnancy, breastfeeding and hypersensitivity to the drug.

ItraconazoleCaps (Itraconazolum). 100 mg; solution 10 mg / ml - vial 150 ml - the drug has a broad spectrum of action, selectively and specifically inhibits the enzyme that catalyzes the synthesis of fungal sterols. Areas: various infections caused by dermatophytes and / or yeast and fungal fungi, such as mucosal candidiasis (including vagina), skin fungal infections, onychomycosis, epidermomycosis, fungal eye lesions (keratitis), peritoneum and localization ofothers. Taking Itraconazole capsules immediately after meals increases its bio-availability; maximum concentration in blood plasma is reached within 3-4 hours. after ingestion. The drug is well distributed in tissues that are susceptible to fungal infections.

Important! When using the drug, side effects from the digestive system may appear: indigestion (nausea, vomiting, diarrhea, constipation, loss of appetite), abdominal pain, impaired taste; headache, dizziness, allergic reactions, alopecia, from hematopoietic organs (rare) - leukopenia, thrombocytopenia. Use is contraindicated in case of hypersensitivity to itraconazole and any of the components of the drug, children under 3 years of age, pregnancy and lactation.

For optimal absorption of the drug, it is necessary to take capsules without chewing, immediately after a meal, swallowed whole. A course of pulse therapy for onychomycosis consists of daily intake of 2 caps. medicine twice a day for a week. For the treatment of fungal infections on the nail plates, two courses are recommended. For the treatment of fungal infections of the toenails, three courses are recommended. The interval between courses, during which you do not need to take the medicine, is 3 weeks.

Terbinafine(Terbinafine) - produced in the form: tab. 250 mg; 1% oil 15. 0 g; 1% cream - 10, 15, 30 g tube; 1% spray, 20 ml. The drug is referred to as allylamine and is prescribed for systemic and external use. The mechanism of action of Terbinafine is associated with inhibition of the initial stage of ergosterol biosynthesis (the main cellular sterol of the fungal membrane) by inhibiting the specific enzyme squalene-2, 3-epoxidase in the fungal membrane. The drug is effective against many pathogenic fungi for humans. With topical treatment, Terbinafine is more effective than azole, imidazole derivatives, but comparable to itraconazole, and when administered orally, it is more effective than griseofulvin and itraconazole. Terbinafine is characterized by lipoidophilia, spreads rapidly in the stratum corneum of the epidermis, dermis, subcutaneous tissue, accumulates in sebaceous glands, hair glands and nail plates in concentrations that provide a fungicidal effect. 1 file. once daily terbinafine results in higher cure levels and better outcomes for each efficacy criterion (including mycological cure) than intermittent intraconazole therapy.

Naftifin(Naftifine) cream 1% - 15, 30 g; 1% solution of 10, 20, 30 ml, is a derivative of alilalamines. The mechanism of action is associated with inhibition of the activity of the enzyme squalene-2, 3-epoxidase, inhibition of ergosterol biosynthesis, which leads to a violation of cell wall synthesis. Naftifine has a broad spectrum of action, acting as a fungicide against dermatophytes (such as Trichophyton, Epidermophyton, Microsporum), mold (Aspergillus spp. ), Yeast (Candida spp. , Pityrosporum) and other fungi, for example (Scrich)Sphenor). . . The drug has an anti-inflammatory effect, reduces itching. When applied externally, it penetrates well into the skin, creating stable antifungal concentrations in its various layers.

The duration of treatment with Naftifin varies from 2 weeks to 6 months. When using the medicine, dryness and redness of the skin, a burning sensation may occur, all of these side effects are reversible and do not require cancellation.

Amorolfine(Amorolfine) nail polish 5% - 2. 5 and 5 ml, - a preparation for external use, has a broad spectrum of action, providing fungistatic and fungicidal action due to damage to the cytoplasmic membrane of fungi disrupting the biosynthesis ofsterol, due to inhibition of enzymes 14– game demethylase and 7 gamma isomerase. The drug is active against the most common and rare pathogens of fungal infections of dermatophyte nails: Trichophyton spp. , Microsporum spp. , Epidermophyton spp. ; molds: Alternaria spp. , Scopulariopsis spp. , Hendersonula sppi. ; fungi of the family Dematiaceae: Cladopsorium spp. , Fonsecaea spp. , Wangiella spp. dimorphic fungus Coccidioides spp. , Histoplasma spp. , Sporothrix spp.

When applied to the nails, the medicine penetrates the nail plate and further into the nail bed, almost completely within the first 24 hours. The effective concentration remains on the affected nail plate for 7-10 days. after the first application. Systemic absorption is negligible. Applied from the outside. The drug is applied to the finger or on the palms of the hands 1-2 times a week. The duration of treatment is determined individually and depends on the indications for use. Side effects are rare and appear in the form of itching, burning at the application site. Not prescribed for young children and infants.

Undecilenic acidand its salts - antifungal drugs for external use, which have a fungistatic and fungicidal effect against dermatophytes, when combined with zinc or copper salts - zinc undecylenate or copper undecylenate - activity increases. Zinc, which is part of the medicine, has an astringent effect, reduces the appearance of signs of skin irritation and promotes faster healing.

The preparations are applied to a clean and dry surface of the affected skin 2 times a day (morning and evening). The duration of the course of treatment is 4-6 weeks and depends on the nature, effectiveness and course of the disease. After the disappearance of clinical signs of the disease, they continue to be used once a day. For preventive purposes - 2 times a week.

Important! Contraindication to the use of the drug is hypersensitivity to undecylenic acid and its derivatives.

Cyclopirox(Ciclopirox) nail polish 8%, fl. 3 g, is a broad-spectrum antifungal drug that inhibits the uptake of precursors for the synthesis of macromolecules in the cell membrane. Externally applied for the treatment and prevention of fungal infections of the skin, mucous membranes, nails, fungal vaginitis and vulvovaginitis.

The drug is applied 1-2 times a day on the affected nail, the duration of use depends on the severity of the wound, but should not exceed 6 months.

Treatment of onychomycosis should be done under the strict supervision of a dermatologist. As a rule, a complex etiotropic rational therapy is used. A decrease or disappearance of clinical symptoms is usually observed a few days after taking an antifungal. However, in order to avoid recurrences of the disease, the course of treatment must be fully carried out. Against the background of clinical treatment, anti-relapse therapy is often performed, aimed at preventing re-infection.