Onychomycosis is a nail fungus. Causes and signs of the disease, ways of treating it

Nail fungus - onychomycosis - is a common nail disease, from which, according to various authors, one-fifth of the population suffers. Most often, it affects the elderly, and in age groups with a difference of 10 years, its frequency increases approximately 2. 5 times. This is not just an aesthetic obstacle, as in the case of a sharp decline in immunity and the addition of a bacterial infection, serious complications can develop, for example, erysipelas and in the absence of attention to the problem, the disease becomes chronic, threatening toall family members with infection. 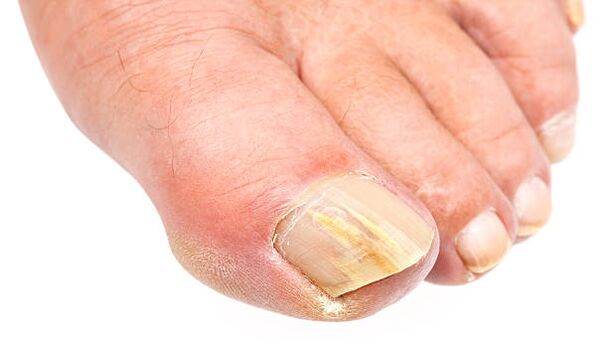 How to recognize onychomycosis: symptoms of a fungus

A warm and humid environment is the best place to develop fungal infections. And the climate does not have to be hot; for example, you can create favorable conditions for the fungus by wearing shoes that sweat on your feet.

The source of infection is usually another person who is not involved in the treatment of onychomycosis, does not monitor the condition of the nails or someone who has not taken treatment measures for complete cure. Approximately one third of patients visiting a physician have such a patient in their family. At the same time, according to statistics, men get sick two to three times more often than women, but less often seek medical help.

The development of nail fungus is facilitated, as we have already said, by the need to stay in warm or uncomfortable shoes for a long time - onychomycosis is prevalent among miners, metallurgical workers and military personnel. The necessity of being barefoot in public places also matters. Thus, one study found a higher prevalence of nail disease (onychomycosis) among professional swimmers and another among mosque visitors (where you should be barefoot), compared to the main population of the respective age.

In addition, the likelihood of fungal nail infection increases in people with diabetes mellitus, blood diseases, HIV, as well as in long-term use of cytostatics, corticosteroids, antibiotics. This is due to reduced immunity in such patients and microflora imbalance (with antibiotic therapy).

In summary, the following predisposing factors of nail fungus can be distinguished:

At first, the fungus colonizes only part of the nail, reaching there from the foot or from the interdigital folds, but gradually spreads throughout the nail plate. The fungus penetrates under the nail plate from the side of the free edge of the nail or from below the nail roller. Depending on the localization and manifestation of the symptoms of onychomycosis (from one or another edge of the nail), dermatovenerologists distinguish between different forms of fungal infection and its stages.

At first, these manifestations may be subtle, but as the fungus develops, the nail becomes less and less aesthetic. Often this causes the patient to constantly hide his feet, to walk in closed shoes even in the heat, which exacerbates the problem.

Traditional methods of treating onychomycosis are extremely different. What is not suggested to lubricate the long-suffering nail: vinegar, soda or salt solution, iodine, coffee, apricot gum, tea tree oil, etc. Unfortunately, most of these remedies are ineffective. First, the substances proposed for treatment for the most part have no antifungal activity. Second, to infect the fungus, the medicine must penetrate the thickness of the nail plate and under the nail, because it is there, and not on the surface, that the fungus "lives". Moreover, the medicine must, as it were, saturate the nail plate throughout the period of nail growth, otherwise the fungal colony will spread to the new surface.

Based on the above, pharmacologists create healing tools for treating nail fungus. But it must be said here that onychomycosis medications can be local and systemic. Systemic medications are oral medications. Generally, these are the same medications prescribed for fungal infections of other localizations: thrush, extensive skin or intestinal lesions, systemic mycoses. They are quite effective, but relatively toxic and adversely affect the whole body with prolonged use (and the treatment of nail fungus lasts more than a month). Therefore, oral agents have strict indications:

Medicines for the systemic treatment of fungal infections are sold only with a doctor's prescription. He also prescribes a course of treatment, as the medication must be taken several times according to a certain scheme in order to maintain the required concentration of the active substance in the nail plate.

Local remedies are presented in different forms: varnishes, oils, sprays, solutions. However, treated varnishes can only be used in the initial stage of the disease, then they will not be effective. And oils and sprays are more suitable for treating fungal infections of the skin than nails. So the best medicine of the day is liquid medicine. The solutions allow you to create a higher concentration of the active substance in the places where the fungal infection accumulates, and not on the nail surface.

So treating nail fungus is a long process that requires precision and patience, however, modern medications and treatment regimens allow you to completely get rid of onychomycosis and prevent its recurrence. You should not ignore the problem, because in this case, the health and quality of life of not only the patient, but also his loved ones are in danger.